Dr. Bell noted that purpose, perspective and possibility are the three components of the transformation process that are required to work together when it comes to helping someone transform their own life. 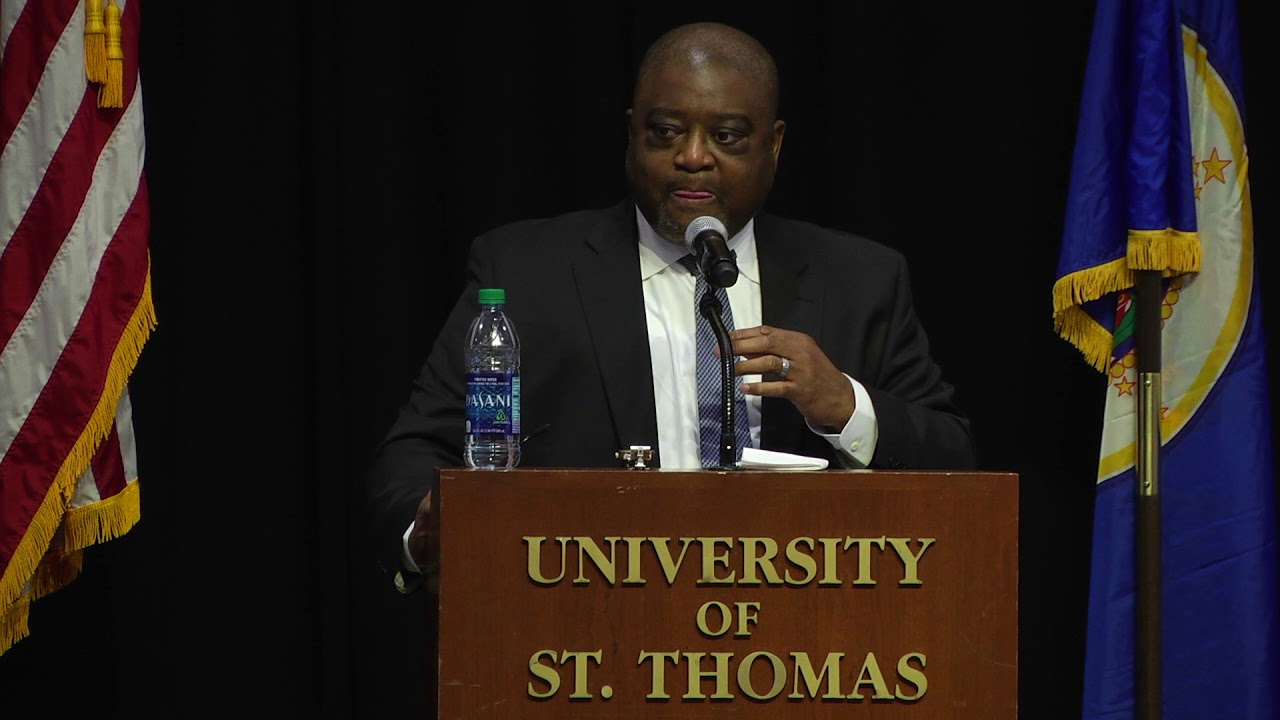 I want to begin by thanking the Board and Otis and the team at Ujamaa for inviting me to spend this morning with you. And just acknowledge that I’ve reached that point in life where I have to take my glasses off to see.

And that even when I take them off, I still can’t see.

But I want to thank you for the important work that you’re doing with finding a way to give men a next chance. And I say a next chance because sometimes we become comfortable with the notion that you can get a second chance. But if most of you in this room are like me, it took a little bit more than two chances for us to get to this place that we are and we’re still in a place —

And we’re still in a place of becoming, because we haven’t become yet what we will become. And that is the way that I see men and women and children who have not yet arrived at that place that has been set for them.

As I was preparing for this morning, I was reminded that the namesake for the community of Saint Paul wrote in his letter to the Romans about changing lives. The Apostle Paul wrote, “And be not conformed to this world, but be ye transformed by the renewing of your mind that you may prove what is that good and acceptable and perfect will of God.”

As I start this conversation this morning, I am reminded that for incarcerated men and women, and just people who have fallen on hard times, who haven’t achieved all of the glory that their lives still holds. For them, they face almost every barrier that is possible to disrupt them and to disrupt their pathway.

When I talk about incarcerated people, I’m not just talking about those who have been held inside of walls and behind bars, but I’m also talking about people who have been incarcerated by the life-stealing of hopelessness. Because being found in a place of hopelessness can have you more bound up than any set of walls or set of bars can ever make you. And until we restore hope in people’s lives, we have not yet set them free. And so —

would be all but inevitable for each one of the men whose lives you’ve touched.

It’s time to do something different.

And yet before we decide that we’re at least 25 percent successful, I don’t want to suggest to you that the 25 percent that don’t get rearrested succeeded, because many of them are dead. Because the community that they were taken away from didn’t change for the better while they were gone, and they are not prepared after they’ve been away to come back and be a part of making it better. And so for me, I thank Ujamaa Place because you’re on a pathway that says that if we don’t turn around. I think about what they said about Noah after that flood: if something doesn’t happen to the hearts of men, the same thing is going to happen again. It’s time for us to make a decision.

Now I took my watch off because I was told that you don’t have all morning.

Get to where you’re going and sit down.

So I’m going to try to be brief this morning. I told the timekeeper who’s going to be waving those flags in the back I don’t have my glasses on so I can’t see you.

But what I want to say to you this morning can be summed up in three words: purpose, perspective, and possibility. These are the three components of the transformation process that are required to work together if we are going to succeed not in us transforming somebody’s life, but in us helping them to transform their own lives.

Let’s first talk about purpose. As donors in this room and supporters in this room, as staff members in this room, it’s clear that your purpose is to be a conduit, to be a vessel through which resources and opportunities can be passed on to those whose lives need to be changed. But essential to being able to live a transformed life is to have a renewed sense of purpose about who you are and about why you are who you are. A sense of purpose provides a life pathway to follow, and purpose drives us and sustains us as we have a quest to find meaning in our life.

I would say to you that in the transformation process, there are three aspects of purpose that we need to focus on and that we need to get a handle on how do we make this happen.

The third aspect of purpose is repatriation. Now most of us think about repatriation as bringing one back to their country, or bringing money that – like me, you guys I’m sure having those offshore bank accounts that —

— you want to repatriate to this country. But repatriation is about helping the person return home. You see, a man who does not know home is incapable of being at home. Even those of us who have the capacity to take vacations, so you’re away from home by choice, there comes a point in time, regardless of how much beach and sunlight and ocean you have around you, something inside of you says I need to go home. And when you have no home, it’s hard to know who you are.

As we are looking at restoration, we need to help to restore each of these men to their family, restore them to their community, and restore them to that place where they know that they are in full control of their own destiny. I call it a process because there are no five or six counseling sessions, no five or six meetings that you can go to that will complete this process. This is a process that you will endure for the rest of your life.

We can play a significant role in helping them to do that. But the thing I want us to understand as we walk away from this morning is that when you help men, you have an immeasurable impact on the future of their children, the future of their families, and the future of their communities. And there is no such thing as a throwaway life. The sentencing project suggests that there are 10 million children in this country, most of them under the age of 10, who have experienced the incarceration of a parent. So when you change his life, you are, in the same process, changing their lives.

Nothing against Jordan, nothing against Nike. I just don’t wear them. But if I had walked in here with holes in my pants, with no shirt, no tie, with maybe cut-off sleeves, and my Yankee cap – which I did have on when I came in – but if I walked in here like that and you saw me, would you have had the same impression of me that you had with all of those wonderful glorified words that are written pieces of paper about what I’ve done? But what I’ve done is what God has blessed me to do. It is not necessarily who I am.

it sharecropping but it wasn’t sharecropping. It was just cropping, because we didn’t get any of the money. What I am is the little boy who was made homeless under that institution before I was one year old because all of my older siblings had moved away, and the folks told my mama that she had to take her five children, me being the baby, and get off their land and get out of their house.

What you see when you look at me requires us to change our perspective. But in order for the men that we’re working with to create a space where they can change their perspective is that the man himself needs to be able to remove those images of himself that he has been fed about himself and taught to believe about himself all of his life. For us to be helpful in that process, we need to be able to remove from ourselves those images that say to us he can only be this much. He can only achieve that much. We need to understand that the next chance that we are offering here to these men is no less than the next chance that we would offer to one of our children. Because if something is not good enough for our own children, then it is not good enough for anybody else’s child and —

The third component of transformation is possibility. I dare any one of you to believe in the possibility of a transformed life, and to believe so deeply in the possibility of a transformed life that you would commit this morning to not only just giving your money but giving yourself – giving of yourself to engage in helping to transform one life, because the return on that investment cannot be measured in what you’ve given to the least of these, my brother.

But I dare you to rise up this morning and say I am going to give like I’ve never given before because my future depends on it and the reality is all of our futures depend on each one of us. The sign is up.

My watch goes back on.

But what I want to just say to you is that this type of transformation is the hope that we should have for every woman and every child and every man.

She said that he couldn’t see the sign but I can play a tune and he can hear that.

Thank you for inviting me this morning, and God bless you all.